By administrator on August 31, 2016 in Buying Process, Columbus and Central Ohio Market Update 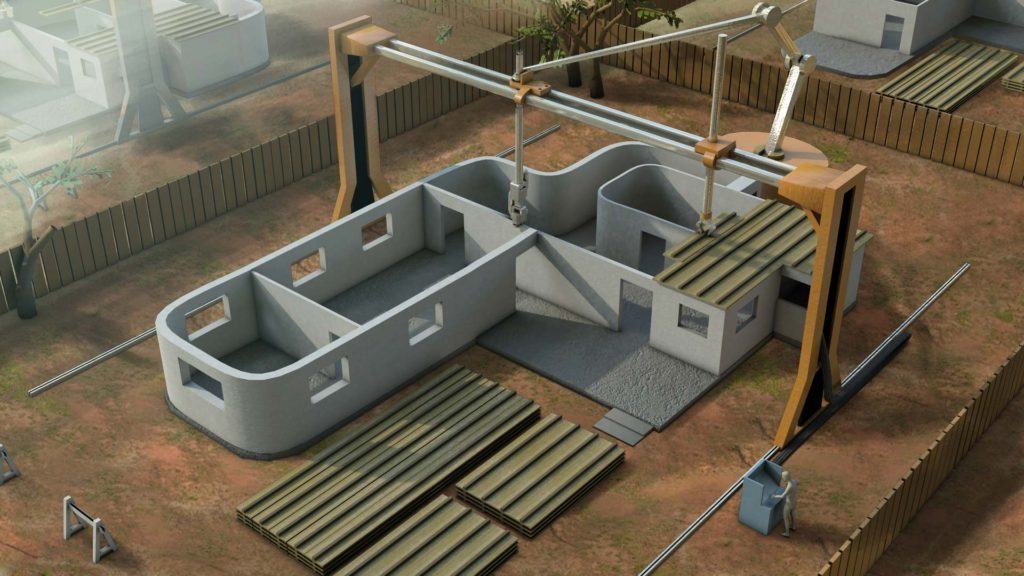 Printers have come a long way from simply churning out reams of spreadsheets, high school history reports, and cute cat photos. In case you haven’t heard, 3-D printing is rapidly changing, well, everything. The technology is making the unimaginable real, already producing everything from simple plastic toys to edible pizza and even human tissue and body parts (an ear!). Additive technology, as it’s also called, promises to revolutionize the world as we know it.

And the greatest potential for transformation and disruption, some believe, may be in housing. If “printed homes” seem like a distant fantasy, you’d better buckle your seat belts. You’re in for quite a ride.

So how exactly is 3-D printing poised to reshape the housing market?

Well, let’s start with price. Three-dimensional printers don’t require laborers, produce much less waste (as materials are fed into the machines), and will be able to erect homes in days instead of months—making them substantially cheaper to build. And that’s expected to extend the American dream to a whole new group of buyers who would otherwise never be able to afford their own abodes.

Gone will be the problems caused by a shortage of highly skilled construction workers, long building times, and wasted materials such as lumber.

And let’s touch on dreams. Three-dimensional printing will eventually help facilitate the creation of radical new housing designs, new shapes, and brand-new architectural ideas. The road from fanciful concept to livable reality will become shorter and more traversable than ever.

This is exciting stuff—and not just for those who are currently priced out of homeownership. Imagine your average accountant or Chipotle manager being able to design their own Frank Gehry–styled, uniquely shaped home on a computer— and a specialized, industrial-size 3-D printer bringing it into existence in a matter of hours or days for just a fraction of the usual price. Then think of what the technology could mean for storm-ravaged communities if residents who lost their homes could have identical replacements easily printed, complete with furniture.

And we’re not talking about a far-distant future. Rudimentary printed structures, mostly made of concrete and resembling stark gray boxes, are already sprouting up around the globe. Now a handful of cutting-edge construction companies are engaged in something like a 3-D printing arms race—each striving to be the first to refine the technology.

And while such current buildings may not exactly be the “dream home” of your average buyer, experts predict that within five to 25 years (depending on whom you’re talking to), the technology will be advanced enough to print sophisticated and easily customizable dwellings out of wood, metal, and stone. These are places that buyers would be proud to call their own.

How to print a home

Here’s how it works: Building designs are created in a computer just like in a computer-aided design, or CAD, program and then transmitted to a large, specially made industrial printer, like the one above. The devices vary greatly in size and capabilities, depending on who is making them—but all of them are big. The apparatuses usually have one or more robotic arms tipped with a nozzle that spews out construction materials as the arms make their computer-programmed rotations around the base of the building. (Think of cake icing being squeezed through a piping bag.)

Those liquidlike materials, similar to molten lava, are layered on top of one another to form the walls of the structure. These materials can vary from fiber-reinforced concrete, which doesn’t require steel rebars for support, to steel and even wood, which would require reinforcements.

And eventually, experts predict the technology will print modern-day necessities such as electricity and plumbing at the same time as the home is being constructed.

“It’s still very early,” says Aric Rindfleisch, executive director of the Illinois MakerLab, a 3-D printing lab at the University of Illinois at Urbana–Champaign. “We’re probably back to where the computer industry was in 1982.”

The challenges to 3-D printing

So when is it coming, for real?

Opinions vary. Rindfleisch believes the technology is still about 25 years away from creating sophisticated homes that buyers would be vying to live in. Other experts have pegged the timeline closer to just a decade—or even half that.

The challenges lie mostly with the materials fed into the devices—and working around their current-day limitations. Scientists are closely tracking the materials used for construction and how long they take to dry before a new layer can be added, Rindfleisch says.

He says progress is coming at a rapid clip. “About two years ago, all we could print was hard plastic,” he says. “Now we can print soft plastics. We can print wood.” The wood is basically a pulp mixed with plastic that can be fed into the printer.

The printing process is likely to eventually empower more everyday home buyers without fancy architecture degrees to design their own perfect pad on a computer—and then print it out on a plot of land.

“You can have high design on a budget,” says architect Christopher Hurst at WATG Urban Architecture Studio. “You don’t have to go to a builder and get the same cookie-cutter house next door. … Now you can go to a contractor, and you have a highly customizable house that’s indicative of you and that way you can express yourself in how you live.”

In April, Hurst’s Chicago-based firm won the Freeform House Design Challenge with its sleek Curve Appeal home. Construction on the winning design, which will, of course, be printed three-dimensionally, is slated to begin in November by Branch Technology, the Chattanooga, TN–based builder that sponsored the contest.

The home would go for about $900,000 on the market if it were conventionally built, Hurst says. But he hopes to print the carbon fiber structure at a Chattanooga site at a fraction of the cost.

“The limitations are [that] the arm [of the printer] can only reach so far,” he says of the 15-foot appendage. “If you print large structures, you’d need a much bigger machine. … Eventually, we’ll have multiple arms printing simultaneously.”

Once the technical challenges are solved, a 2,500-square-foot home could go up in less than 24 hours instead of months, predicts 3-D home building pioneer Behrokh Khoshnevis, an engineering professor at the University of California, Los Angeles. He gave a TED Talk on the subject.

And the buildings could be more attractive to buyers than those constructed by human hands, he says.

A boon to cities?

The new technology could make its biggest mark, at least initially, in the nation’s urban areas.

Three-dimensional printing will enable developers to put up buildings on previously “unbuildable” sites—such as smaller city plots where it would be near impossible to fit a crane, says K.C. Conway, head of market intelligence for commercial real estate lending at SunTrust Bank in Atlanta. It could turn costly and time-consuming regulatory problems into no big deal as building plans will be redesigned by computers—instead of flesh-and-blood architects.

“It will bring affordability back to urban housing,” says Conway, also a member of Counselors of Real Estate, a Chicago-based group of industry professionals who provide real estate advice. “The later adoption will be in the suburbs.”

Another bonus is that homes will eventually be able to go up a lot quicker—that’s particularly important in natural disaster–ravaged areas, points out Alex Le Roux.

He began designing a 3-D printer while he was still a mechanical engineering major at Baylor University in Waco, TX. Now the 23-year-old is CEO of Vesta Printer, which printed a rudimentary, 120-square-foot building in June in Katy, TX. He’s hoping to soon print larger ones.

His company has received funding from ModEco Development, a Rochester, MI–based builder that has been experimenting with the technology.

“This is where we see the business going,” says ModEco owner Drake Boroja. “The American dream is getting harder and harder to get [as the prices of homes are soaring]. We see these tools as a way to keep this dream going for the next generation.”